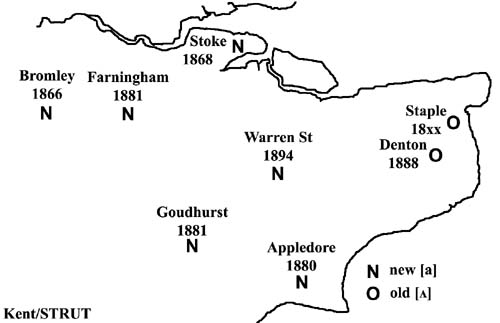 This post continues from the introductory Nineteenth century sound change in Kent, where the informants are introduced and the background presented.

Alexander Ellis (1889, On Early English Pronunciation, Vol. 5, Teubner) recorded the surviving dialect pronunciation of STRUT in Kent and East Sussex as [ʌ]. His examples were collected in the 1870s from adults whose speech was acquired in the 1850s or earlier. Henry Sweet (1877, Handbook of Phonetics, Oxford, Clarendon), gave [ʌ] as the corresponding RP pronunciation.

For comparison, here are two RP examples, contemporaries of the Kentish informants. One is a political broadcast recorded by the BBC in 1931 by politician Stanley Baldwin (1867-1947), and the other is a Linguaphone recording (British Library) made in 1929 by Professor Daniel Jones (1881-1967).

Both Baldwin and Jones have the new [a]-like STRUT, with F1 600-800Hz, despite Daniel Jones’ describing the older [ʌ]-like form (like Ellis and Sweet), unmodified through all nine editions of Outline of English Phonetics. At some time, possibly the amended 8th or 9th editions (1956 and 1960), he added a new §335a, describing a variant approaching cardinal a in what he called Southern English, “a less ə-like vowel than mine”. However, his instances of STRUT in the recording below are definitely not ə-like.

This is one more RP puzzle, [a], not [ʌ], for STRUT by RP speakers born in the 19th century and recorded around 1930. And then, in the 1950s, Daniel Jones described an [a]-like STRUT as regional. Gimson (1962, An Introduction to the Pronunciation of English, Arnold) described STRUT as a “centralized and slightly raised cardinal [a]” in “general RP as used by younger people”. This means that the [a]-like STRUT has been recognized in RP roughly since the post-1945 period. This is confirmed by Fabricius’ longitudinal study back to 1900 (2007, Variation and change in the trap and strut vowels of RP: a real time comparison of five acoustic data sets, Journal of the International Phonetic Association 37:293-320). Harrington, Palethorpe and Watson (2000, Monophthongal vowel changes in Received Pronunciation: an acoustic analysis of the Queen’s Christmas broadcasts, Journal of the International Phonetic Association 30:63-78) also reported the [a]-like STRUT in the speech of the Queen (born in 1926), with F1  600-1000Hz. So who had the [ʌ]-like STRUT? Alexander Ellis, born in 1814? Henry Sweet, born in 1845? But Stanley Baldwin and Daniel Jones demonstrate that this sound change was appearing in RP already in the late 19th century, about the same period that it was spreading through rural Kent.